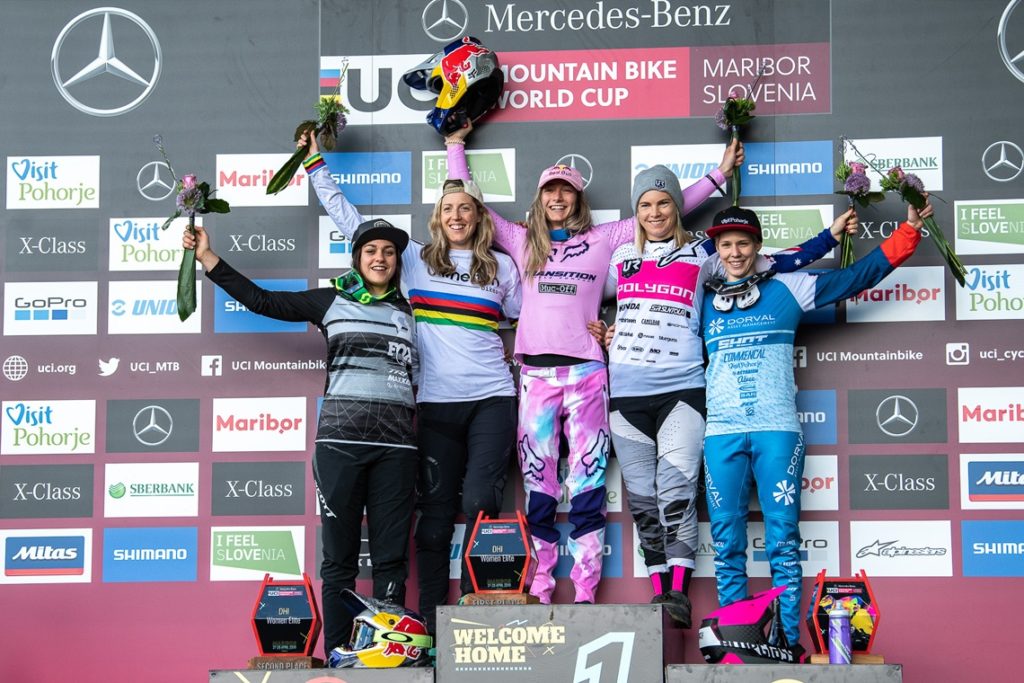 The first world cup is behind us and what a weekend it was in Maribor, Slovenia!

First of all, a big congrats to Tracey for winning the qualification and taking the 3rd place at the race.

Like Mick 18 years ago, Maribor was Simon’s first world cup! Simon held the pressure very well and was riding fast all weekend. A big crash would slow him down during qualification but he was still able to be in the top 20 and advance to the final.

In his final run, Simon push to the limit and crashed. He finished 13th. We know Simon was on a good pace for a top 5 and this first race was a good experience for him to learn.

Tracey was riding super fast all week. She took a big crash just before going for her timed training and couldn’t go back on her bike that day. After a good rest, she felt back on track for qualification. It started raining just before the elite women took the start but Tracey kept a positive attitude and pinned it down to take the fastest time! She would be wearing the leader jersey on this first world cup!

On race day, Tracey felt the pressure of being the last women down but kept her focus and had a great run. She takes the 3rd place and some good points towards the overall standing.

Mick had a consistent week. Qualification was challenging due to the unforeseen rain that made the track super slippery but he put a fast and safe run. For race day, the track was back to what riders had been riding all week. Mick takes the 31st position and he is happy about a clean run building confidence and speed for the rest of the season.

As for Alex, he was riding incredibly fast all week! His timed training didn’t lie as he was the 3rd fastest. Qualification would be the real test to see where Alex was standing really but the rain made the track so different that Alex just made it with lucky number 60. The morning of race day, he was glad to see the track was back to what he liked, super fast and technical! Alex had a mechanical issue on his way to the start gate. His mechanic did his best to fix it but nothing could be done and Alex had to take the start with this mechanical. He raced giving it all and took the 23rd rank. We were all very bummed for Alex as we knew he had what it took for a great result as his timed training run time would have placed him close to the top 10.

It’s been a good week of racing and we are glad this season opener is behind us. The DH team has now 1 month to make the last adjustments before hitting the Word Cup circuit for the summer. In 2 weeks we will see Fabien racing the EWS of Madeira.